Looking for advice on being a working musician in Chicago? Our Working Chicago Musician series highlights our talented teachers’ experiences and lessons learned. (Read our first installment on Andrew Lawrence.)

This second installment features Lucas Gillan, an amazingly skilled drummer and a paragon of musical professionalism. Lucas is also a recent recipient of a $5,000 Luminarts Jazz Fellowship. Read on, and geek out further on Piano Power founder Abraham Levitan’s music/life podcast, Nerds On Tour. 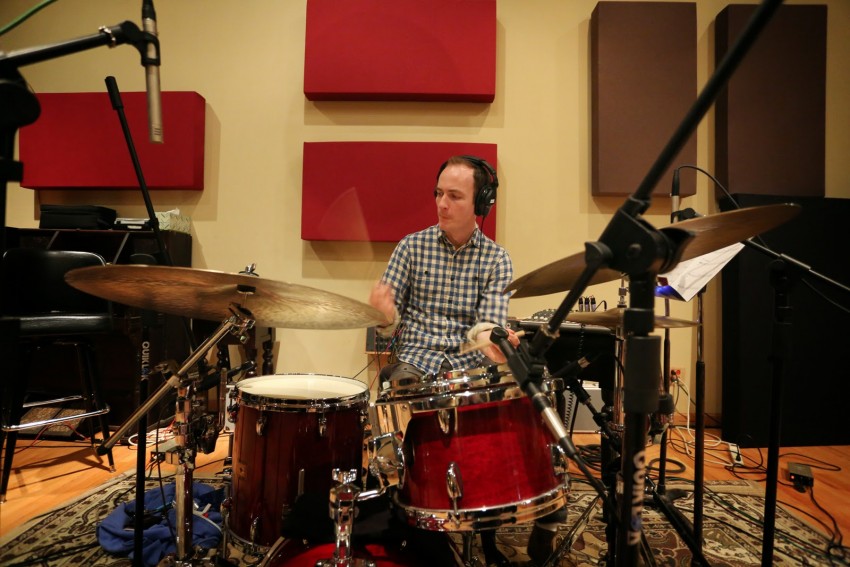 During my phone interview with Lucas, he got a call that perfectly illustrates the teacher- musician conundrum. A friend he described as one of the “best young guitar players” in Chicago asked if he could play a gig in suburban Downers Grove that night with an internationally-known bassist he admired.

Lucas was thrilled, but saying yes meant canceling on his students last minute—”totally letting them down”—getting stuck in suburban rush hour traffic, and earning less than he would teaching.

Because he was in the midst of our conversation, Lucas told the friend he’d call him back. He asked what I thought. Is saying yes to last-minute, prestigious gigs worth the financial hit? And what about the disappointed students?

“I have friends who are teachers, and they say ‘students will get over it’,” Lucas said, “that you teach so you can play music, so why would you ever choose one over the other? But I don’t completely agree with that. If I did I wouldn’t teach, and I’d be a musician one hundred percent.” 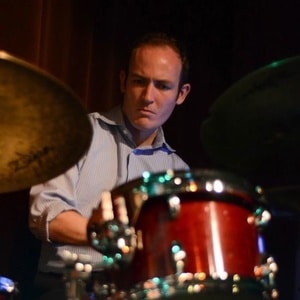 I’m struck by that comment, because looking at Lucas’s roster of projects outside of teaching— he heads his own original jazz quartet Lucas Gillan’s Many Blessings , plays with R&B band The Right Now, is a permanent member of Terry Bartolotta and Dan Burke’s original jazz groups, and takes other freelance gigs while earning his MA at DePaul—he seems to be going one hundred percent.

Minutes later, Lucas got a text. He lost the gig. The guitarist friend called someone who immediately said yes. Lucas took the news in stride, recalling with a laugh how just days before he’d missed out on another high-profile gig at Andy’s Jazz Club because he left his phone in the bathroom.

Perhaps his sense of humor helps him thrive in this frenetic, unpredictable, drop-everything career?

And perhaps it was his phone call with me that stalled him, keeping him from getting that gig? Regardless, Lucas was kind enough to share his story, and the wisdom he’s garnered as a teaching and gigging musician in the almost ten years since graduating from the jazz studies program at Northern Illinois University in DeKalb, where he played in the NIU Jazz Ensemble, giving him opportunities to play with jazz greats Antonio Hart, Claudio Roditi, and John Clayton, among others.

My mom is a drummer; she started playing drums in fourth grade. She let it come in and out of her life, got back into it in college, and mostly stopped playing when she started a family. Her drums were in the basement, and for fun we would pull them out and make noise on them. When it was time for me to pick an instrument, I chose the drums.

There was an expectation that us kids would be musical. My older brother was really, really into music as a listener, but he also played saxophone. He was into underground punk, metal, and indie rock, but also loved Coltrane, so I didn’t have to be convinced that jazz was cool. I had this combination of my mom being a drummer, plus a cool older brother who liked jazz; it led me to an early start in jazz drumming. I started playing in a jazz combo when I was in sixth grade and was super into it. For some kids, it’s like pulling teeth to get them excited about jazz, but I had already gotten over that barrier.

In high school I was in an all-city jazz program, originally called JazzWerx then Arizona Jazz Academy. Now it’s known as the Tucson Jazz Institute and it’s a world-renowned, award-winning program. I was playing with the best teenage jazz musicians In Tucson, and then I started playing with the pros in town who ran the jam session and played gigs.

At the same time, I was really involved in Tucson’s underground punk scene, playing guitar and drums in punk and metal bands and going to shows all the time. That was an equally important part of my musical development.

I always knew I wanted to get out of Arizona. Even though it was a great place to grow up, I had this feeling that there was something bigger out there. Even before I wanted to be a professional musician, I pictured being in a major city. My mom has roots in Chicago and my siblings went to college here, so I had visited throughout my childhood and had an affection for the city. I figured that Chicago must have a happening music scene, but I didn’t really get an appreciation for what was going on here until after I graduated from college. At NIU, we knew about some of the big names in straight-ahead jazz in Chicago, but as I got older I realized there’s such a rich, multilayered tradition of different styles, scenes, and lineages.

In Tucson I saw it was possible to make a living as a musician. I had good exposure to the scene there, and knew a handful of drummers who made their living teaching. There was a lot of energy in the jazz scene in Tucson, so I thought if Tucson has that, Chicago must have it times one hundred.

How did you network in Chicago as a newbie?

A large part of it has been connections from NIU. People always say it’s much easier to break into a scene if you go to college there. I always think about how I end up in a gig, and most of the time it comes back to someone I met in college, even if it’s after six degrees of separation.

After I graduated, my first gig was playing in a little-big-band kind of thing led by a trumpet player. We had a book of over 300 charts from three decades of the band’s history. The leader was a cranky old guy, but it was a great experience. The expectations on us musicians were very high, and we rehearsed regularly enough to be making music at a high level. Through that band, I got the opportunity to play at some well-known Chicago venues right out of college.

At the same time, I fell into a regular rockabilly gig at California Clipper. The musical situation at that gig was almost the opposite of playing with the cranky old trumpet player: we never rehearsed, there were no charts to read from, and the music was all very simple. It was a different kind of education, learning the songs right there on the gig in front of the audience, and playing music for people to dance.

As far as networking goes, you make yourself known by going out to jam sessions and gigs and introducing yourself. I think that most of the people who actually call you for a gig must feel like they know you as a human being. Building actual relationships, outside of the usual jam session small talk, is important.

How do you form those relationships?

How you function socially matters. You need to be a fun, pleasant person to be around, and you need to proactively reach out to spend time and make music with your peers. You’re dealing with human beings; there’s no infrastructure or hierarchy for how this works. It’s not like you apply to the job, and if your resume has all these boxes checked, you’re hired.

What qualities should a young musician have to get gigs in Chicago?

First off, you should be really good on your instrument. If you’re a jazz musician, you should know more than just the basics— you should really, really know it. You need to have a sensitive awareness of whatever the musical circumstance is.

You also need to be super respectful with everyone, punctual, and aware of the presence you bring to all aspects of the gig. For instance, what clothes should you wear? How loud are you while you’re rolling your clunky hardware case through the restaurant? Are you nice to the bartenders? What’s the ideal volume for the band, based on the room’s size and acoustics?

For example, in November. I got a random call to play for a big theater production that featured three vocalists doing a tribute to great female singers of the past. I wanted to be totally ready for it, so I listened to the reference recordings all week to get into that place mentally. I didn’t approach it the same way I would a more open and improvisational jazz gig, but tried to faithfully replicate the sound of the recordings instead. The goal is for the other musicians and the producer to think: “He showed up and did what was necessary for the gig. Next time we need a drummer, we know we can rely on him.” It must have worked because I got called back to do the gig again in February.

When I’m performing my own original music, or someone else’s music that is more open and improvisational, I absolutely want to express my own artistic identity and point of view– that’s what gives me the most pleasure and fulfillment. But if I’m on a gig with a specific set of musical expectations, I often think of myself as not being too different from an electrician or a plumber. You’re hired to satisfy a customer’s specific need. People don’t hire a handyman to do a backsplash that expresses “his own artistic identity”. In playing and teaching, you need to think of doing the specific job in the most professional and satisfying way possible.

What do you think about Chicago as a city for musicians?

Well, I’ve never made a professional living anywhere besides Chicago, so I can’t really compare, but I do feel that Chicago has something of a “Goldilocks” vibe: not too small and not too large. A smaller city might not have enough demand for live music, and a larger city, like New York, is so big that it might be saturated with too many musicians competing for an ever-smaller pool of gigs.

Honestly, it still feels like I’m trying to break into Chicago’s music scene, eight years after graduating college. Still, I’ve been able to do some very cool stuff. I’ve had plenty of wonderful experiences on stage with some amazing musicians. While there are lots of great musicians who I’d still like to play with, at least I’m able to meet them and be on a first-name basis with them. In New York, I’d probably be in this sea of jazz ants trying to meet the jazz queen.

What are your favorite venues to play in Chicago?

I’ve been to most of the main jazz clubs in New York, and I definitely think Green Mill is the best jazz club in America. I’ve had the fortune to play there a few times. The history, something about the room itself— it has this vibe that seems to say: this is where you’re supposed to be if you want to play jazz. It also sounds great in there, so you have a higher level of confidence when playing on that stage.

Constellation, which is just now celebrating its third anniversary, has been a great addition to the scene. I’ve also loved the opportunities I’ve had to attend and play at house concerts, which is a really special part of the Chicago music scene.

Hungry for more on the working musician life? Read how teaching musicians make it work.