Looking for advice on being a working musician in Chicago? Our Working Chicago Musician series highlights our amazing and talented teacher’s experiences and lessons learned. This, the first in the series, features the musically multifarious Andrew Lawrence, who blows our minds with his ability to juggle so many projects. Read on, and geek out further on Piano Power founder Abraham Levitan’s music/life podcast, Nerds On Tour. 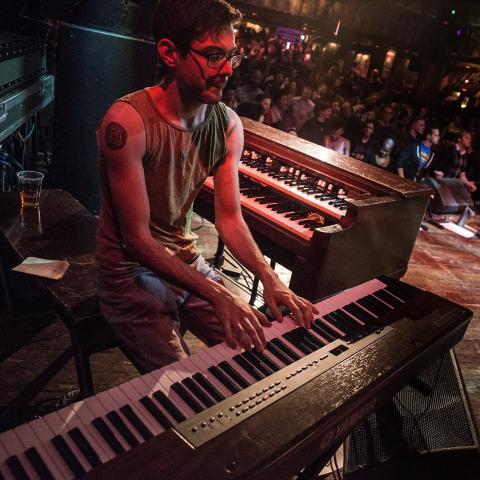 Pianist Andrew Lawrence may be a Chicago native, but upon returning to Chicago after graduating from Oberlin Conservatory of Music in Cleveland, he was a veritable new kid on the Chicago music block.

Newbie no more, Andrew now fronts his own band Kingdom of Zeal and plays with hip-hop duo Bonelang, eclectic fusion band Pocket Radio, and several others. Andrew also plays in the house band for Wednesday-night jam sessions at Lilly’s, and occasionally plays with “jobbing” bands like The Bluewater Kings.

His goal: Making money playing and touring with creative music.

Here, Andrew talks about his experience as a young working musician in Chicago, and gives advice to those forging a similar path.

When I first moved here, I wasn’t doing a ton of music right off the bat. I took some time to figure things out and adjust to life back in Chicago. Through Organ Yank—my band from Oberlin—I met Vince Davis and started playing at the Multikulti jam session. Multikulti was unique because it was the only public jam session that wasn’t in a bar.

That’s how I met a lot of musicians in the city. I started sitting in with the house band, and eventually ended up leading it. Going to sessions, you get to play with and meet a lot of different people. Hosting the jam session, I met more people from the necessity of assembling the band every week. Oftentimes my bandmates couldn’t make it, and I had to find a sub to fill the spot. That process of needing to hire different musicians helped widen my pool of contacts.

The pros and cons of jam sessions

A lot of musicians are down on jam sessions. They aren’t places where you usually get quality long-form music. It’s either people on an amateur level not giving it their all, or people on a pro level who are more interested in displaying ego. But what they provide is a space to network, to hear a lot of different people, and to gauge where you are in the scene.

After I stopped hosting the Multikulti jam session, I started playing in the Lilly’s house band every Wednesday night, which led to my participation in a lot of the bands I currently play in (the AV Club, Pocket Radio, Bonelang). I also met a lot of musicians by going to other jam sessions I wasn’t hosting.

Going to jam sessions is not the only way to meet other musicians, but it can definitely help, especially when you’re just starting out in the scene.

The most important thing for getting gigs is to work on your music. Know what the level of competition is with people you hope to collaborate with. I notice people who sound better the next week as opposed to those who sound the same. People notice if you improve.

Also, reputation is really important. You can network all you want, but if you’re not polished enough in your professionalism, that’s an issue. If people know you as someone who will run music ahead of time, come with gear, is on time and easy to hang with—and you have the skills—then people are going to want to call you.

Music school can help because it has a built-in network. In the city, DePaul kids hang out, Roosevelt kids hang out. It does help you kickstart your network.

Subbing is a big way to get gigs. You get in someone’s phone, and if someone can’t make it they need you. The first year in Cleveland (after graduation), I was just subbing. It took a while until I got my next gig, which was a direct result from subbing. It snowballs. The time between your first and second gig is hopefully going to be the longest time— as the snowball grows it gets faster.

Go to sessions, find out what the music scene is like, go to others’ gigs to see if there’s stuff you’d like to get involved with. Get to know what venues are out there, and find out which ones appeal to you.

You should be willing to venture into clubs you’ve never been before, even if you’ve heard they aren’t the best places. If you can bridge the north side/south side gap, that’s helpful.

Be adventurous, but also have confidence in yourself— if you walk in the room and act like you shouldn’t be there, they’ll get a feeling. People are more comfortable with people they know, but if you go into a situation and you’re relaxed about it, and you have a good air, it becomes easier to make acquaintances.

Find out about different deals that clubs have. Know the difference between a door deal and a guarantee. Know what a contract is and how to use one. Don’t get stuck with an oral agreement.

Why Chicago over NYC and L.A.

Chicago is the third biggest city in country, but it’s still a big city with a big market. Right now there’s a lot of really cool, relatively young people making good music that is fresh, a lot of creative, original bands playing in the scene.

Chicago can be very livable and affordable and you don’t have to pay $1000 to live in a box. You can pay a reasonable rent and live in a good area. As a keyboard player you need to have a car for your equipment, which is not as much the case in New York City.

All that being said, there are certainly great musicians and great opportunities in New York and L.A., if you have a mind to deal with those cities.

Martyrs’, Emporium, the Double Door, and Lincoln Hall are a few of my favorite venues to play. Martyrs’ has a great green room, there’s usually buckets of beer for the band, and their sound guy is the best in the city. Double Door has a nice green room, too, and good hospitality. Emporium Arcade bar treats musicians well, Andy’s Jazz club is probably my favorite jazz club to play. I always make good money there.

Hungry for more on the working musician life? Read How teaching musicians make it work.