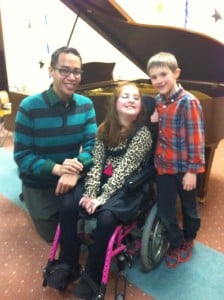 Audie, Sophia, and Sophia’s brother Finn at a recital

Piano Power instructor Audie Lomboy had never worked with a special needs student. So when it came time for his first lesson with Sophia, a then nine-year-old with cerebral palsy, he didn’t know what to expect.

After meeting and conducting their first lesson on a toy piano— the family had not yet purchased a real one—Audie and Sophia quickly warmed to each other.

“She was very engaged and had such a lively and friendly personality,” Audie said. “After our first lesson, Sophia constantly looked forward to her lessons, and so did I.”

Like many parents of special-needs students, Sophia’s parents, Kirsten and Pat, turned to music lessons to help stimulate her development. Sophia was born with cerebral palsy, a motor disorder that cannot be cured, but doesn’t worsen over time.

Though CP presents in different ways, for Sophia it causes spasticity, or stiffness, in her arms and legs, and a reduction of core strength that makes it difficult for her to hold herself up.

From the very beginning, Audie, Sophia, and her family witnessed music’s therapeutic effect.

“Stretching her arms out to reach the piano keys, and isolating her fingers to play one key at a time, became a secondary physical therapy for her,” Audie said. “At the same time it helped improve visual focus and hand-eye coordination. And even further, it provided aural stimulation.”

For some time, Audie and Sophia focused solely on piano. But something special happened when Audie initiated listening exercises, playing for Sophia and asking questions like, “Do these notes sound high or low?” “Does this chord sound happy or sad?” “What does this music make you think about?”

It was the last question that led to experiments in singing and songwriting.

“At first I’d improvise a song and ask for her feedback on what sort of picture it would paint in her head,” Audie said. “Later on, we started creating stories, then the lyrics and melodies came soon after. Before we knew it, she was performing her first original song, ‘Bajj Runs the Race’ at the winter recital.”

Audie and Sophia’s songwriting collaboration is emblematic of their chemistry as teacher and student.

“Audie gives Sophia full creative freedom and never shoots down any of her ideas,” Kirsten said. “He encourages her to make up her own stories, and helps her turn it into a beautiful, finished piece.”

“When it comes to writing music by myself, I oftentimes have so much trouble,” Audie said. “But with Sophia it’s so automatic. The music that comes out is heavily inspired by the images that she paints in my mind. To be part of such a process means a great deal to me.”

From the get-go, Kirsten and Pat were amazed by Audie’s ability to challenge Sophia in ways that really worked. During one lesson, she struggled to identify high and low sounds.

“Audie would get up and stand behind her while he hit notes on different sides of the piano,” Kirsten said. “She thought it was very funny, and it did help her to master the concept. He just seems so comfortable and thoughtful, which comes from his innate kindness and intelligence.”

Though Sophia was Audie’s first special needs student, he is close with someone who has physical limitations. At a young age, a close friend had a stroke that altered his ability to think, speak, and use his hands.

“Growing up together, it became something that I got used to,” Audie said. “I didn’t see him as weird or odd. He only had different qualities about him, just like everyone else.”

When asked how working with Sophia is different from working with his typically-abled students, Audie said it isn’t.

“The approach is very similar: find genres or aspects of music that they love and use it to help them develop their abilities, broaden their appreciation, and grow as an individual,” Audie said.

Kirsten and Pat had a hunch that Sophia, a kid who’s always “brightened up” around music, might thrive with lessons. As choices for students with motor disabilities can be limited, Kirsten noted, music lessons are a viable option.

“This is a great activity with a finished outcome they can be proud of,” Kirsten said.

When looking for a teacher, she recommends finding someone who doesn’t fear the disability.

“Often people don’t know what to say to someone with physical disabilities,” Kirsten said. “They are unsure of the person’s ability to speak, understand, and move, so they just avoid them altogether. It’s so refreshing when people are unafraid and initiate conversations and acceptance. It’s always a good day when you meet someone like that.”

Audie continues to work with Sophia, who is now 12, as well as ten-year-old Joey, another student with cerebral palsy. With Joey, who is passionate about musical theatre, Audie takes the same student-focused approach.

“At every lesson, back then and now, Joey would pick out whatever musical he was feeling at the time, I’d whip out the songbook, and we’d rock out to all the tunes,” Audie said. “The primary emphasis is for the student to have fun. Find what they enjoy musically and run with it.”

For teachers of students with disabilities, Audie emphasizes patience, baby steps, and flexibility in lesson planning. If unsure of what direction to take, think about these areas: tactile, aural, vocal, and visual.

Most important, perhaps, is to focus on what these students can do, rather than what they can’t.

“We all have our limitations,” Audie said. “It’s how we approach them that counts.” 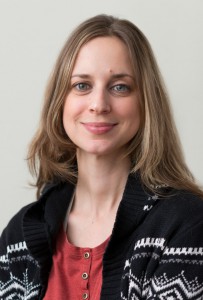 Lara Levitan is Communications Manager for Piano Power. She is a freelance writer and a professional music-appreciator. You can reach her at lara@pianopower.org.