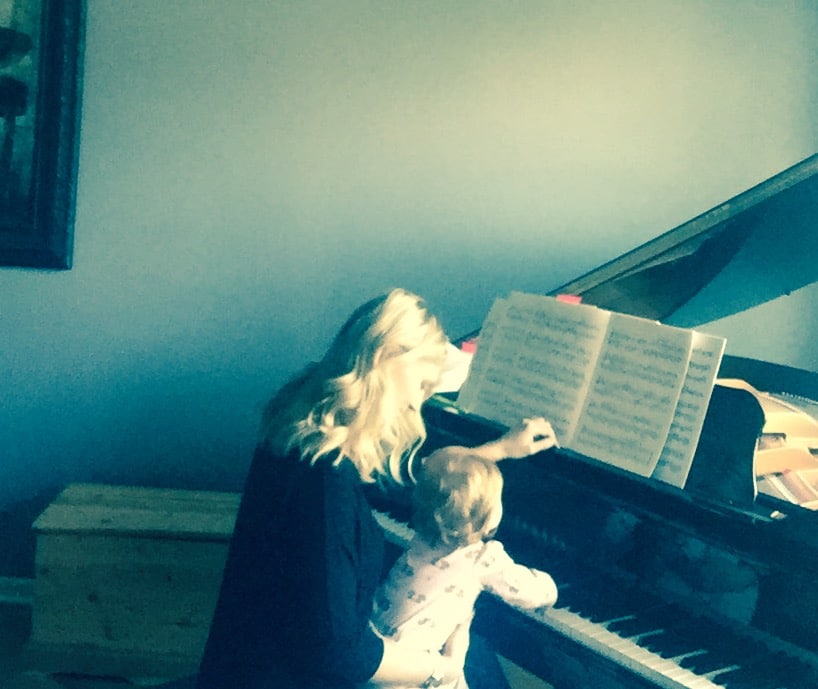 
When Gaea Gomez Fidler was a kid, she loved music, but she found her lessons boring.

“I focused on getting things perfect for recitals, which I could never do,” Gaea says. “My four brothers and sisters also took piano,and two ended up being multi-instrumentalists. So for a long time I thought of learning to play music as a competition I rarely won.”

But enrolling her son Jamie in piano lessons led her to “making friends” with the piano again. Initially, she took lessons as a way to help Jamie develop and stay motivated. But as lessons progressed, she recognized how her own relationship to music was improving.

Like several of the moms I interviewed for this article, Gaea has discovered, or rediscovered, the gift of music lessons. Whether inspired by their own children, redefining their rocky history with lessons, enjoying a creative outlet– or all of the above– these moms are finding multiple benefits in studying an instrument.

Gaea found that along with the mental challenge of putting music theory into practice, relearning the piano had a meditative effect. Playing piano, she says, relaxes her brain.

“For a little while during the day, I tune out external distractions and focus on what is in front of me presently,” Gaea says. “Maybe it’s a stretch, but playing piano is like an active meditation for me with similar benefits.”

It’s not a stretch.

As Melissa Venditti writes in The Mindful Word: “When I play, I can feel the sensation of my fingers pressing against the keys or strings. I can become actively aware of my own emotional reaction to the music on a beat-by-beat basis.”

Others have noted the meditative, relaxing effect playing music can have, a benefit that may be particularly valuable to busy moms.

Parent Alyse Gamson’s story is similar to Gaea’s. She signed up for lessons after becoming “completely entranced” while sitting in on her son’s lessons. Now she enjoys the peace she has found in playing.

“When I’m in a good practice rhythm and playing a song that I love, it immediately puts me in a wonderful, meditative state of mind,” Alyse says. “If it’s a classical piece, I’m completely enchanted and feel a connection with the past.”

Unlike Gaea, Alyse had no experience with studying music before taking lessons as an adult. In the beginning her goal was to sight-read easy music. She then moved on to intermediate songs.

But life can easily get in the way of goals. With three kids under nine and a business to run, Alyse’s biggest challenge is universal: making time for practice.

“It’s important to practice regularly– ideally at least five times a week,” says Piano Power founder and director Abraham Levitan. “But the good news for time-crunched moms is, the length of practice doesn’t matter nearly as much as the regularity of practice. So if all you can manage is five minutes a day at your instrument, you can still progress if it’s a daily habit.”

“I’m not stressing out about finding time to practice, but at the same time I’m using ten minutes when dinner is cooking or ten minutes before we have to go somewhere to play a little bit,” Mindy says. “Instead of checking Facebook I’m playing the guitar — it’s definitely a better use of my time.”

Tricks for getting motivated to practice

Learning the classics is wonderful, but, like exercising to a good playlist, it’s the songs we really love that get us going.

For Alyse, learning easy versions of songs by Jason Mraz, Imagine Dragons, and Elvis Presley was the jolt she needed to get her practicing.

Taking private lessons at home has been key for Gaea and her son’s success. Gaea describes her son as “pokey” when it comes to leaving the house. Add that to the time sucks of getting dressed, gathering supplies, hustling in and out of buildings, and lessons can quickly devolve into another chore.

“Having lessons at home makes it easier to incorporate piano into our regular routines,” Gaea says. “It’s no longer an event — it’s just another one of those things we do, like eating our dinner or brushing our teeth.”

But perhaps the most important belief to hold about practice is that sometimes, you’re just not going to do it. And that doesn’t mean you should give up or not take lessons at all. Parent Taryn Fisher says that flexibility is key to balancing work, family, and personal time.

“I am not going to pretend that I am a poster-child for the ‘mom who does everything.’ I can’t,” Taryn says. “Accepting that this is something I am doing for myself, a treat, something to look forward to, is important. Which means not squeezing it into an already stressful day. But also not putting it last after everyone else’s needs are met.”

Lessons show us how to learn again

Buddhist teacher and monk Suzuki Roshi said, “In the beginner’s mind there are many possibilities, but in the expert’s there are few.” In a way, kids are masters of “beginner’s mind”. Constantly learning new things, they’re very well-acquainted with what it feels like to be new to something. But adults? Our egos cringe at the sound of our own amateur playing.

“I do feel a little vulnerable as an adult not feeling like I’m entirely competent as I’m learning a new piece,” says parent Lindsey Harrington, who is also a middle-school teacher. But rather than letting that feeling of incompetence stop her, Lindsey embraces it as a chance to deepen her self-compassion.

“It’s always good to remind myself of the various learning styles and give everyone, myself included, a bit of grace during the learning process,” says Lindsey. “It takes different people different lengths of time and a variety of methods to figure things out, and it’s good to be reminded of that.”

Jacqueline Arrigo, a Piano Power teacher who also has a young daughter, has played, taught, and performed piano for years. She recently started guitar lessons to challenge herself with a new instrument.

“[As a music student in college], I just never had the motivation to practice guitar, especially with my shiny piano sitting right there,” Jacqueline says. “But as a student now, it’s fun, challenging, and empowering to learn. In the end the goal is the same for me– to always be learning.”

As Taryn puts it, why do only what comes easily?

As a new mom, Jacqueline is passionate about bringing music into her daughter’s life. While she struggles with the “mom-guilt” that comes with choosing to pursue her own interests, she loves the ways music enriches her relationship to her daughter. It’s worth delaying the laundry for.

“Livvy loves music and always hangs out with me in our music room while I’m playing,” Jacqueline says. “She has her own mini-piano and other percussion instruments that keep her busy while I practice. I want her to be surrounded by music, and this is a perfect way to do it.”

Spouses taking music lessons can also enjoy the excitement of learning something new together. After helping her husband find a guitar teacher, Mindy realized she wanted lessons too. They’ve now found that playing together helps connect them as a couple.

“It’s hard to find time to practice at the same time, but when we do, we start laughing or smiling because we messed up,” Mindy says. “And it’s fun when my son walks in and wants to take out his guitar. He’s not taking lessons yet but it’s getting him interested.”

Several of the moms mentioned playing with their kids, playing songs their kids wrote for them, being delightfully surpassed in skill by their children, or letting songs learned in lessons drive what the family listens to together.

It goes to show that once someone in the family starts lessons, a passion for music begins to permeate the home.

“My husband started taking piano lessons this year, and our youngest can’t wait to have some lessons,” Alyse says. “Music is such a gift. We hope to inspire our children so that they will take advantage and want to learn instruments at a young age.”

Taryn grew up in a musical family. Her brother went to a music conservatory, her sister is a professional performer, and her parents play together as a music duo. She easily envisions a family band in her future. Describing herself as formerly the least confident musician in the family, she now has the confidence to feel excited by the prospect.

Momhood is equal parts joy and pain, euphoria and exhaustion. The time women may have once had for soul-searching, creative expression, or intellectual pursuits, may be easily replaced with caring for kids and nurturing their spirits.

“Being a working mom means I have lost a lot of the time that I used to dedicate to being creative. The creative part of me had been missing for almost a decade, and that can be a sad loss,” Taryn says. “Tapping back into making music has been so refreshing, like, ‘Oh, it’s nice to see creative Taryn again’.”

Before we become parents, we understand that parenting involves sacrifice. But when the sacrifice becomes real, seeping into our daily lives, we can begin to feel starved. Music lessons — with the social and introspective opportunities they offer– can be a marvelous antidote.