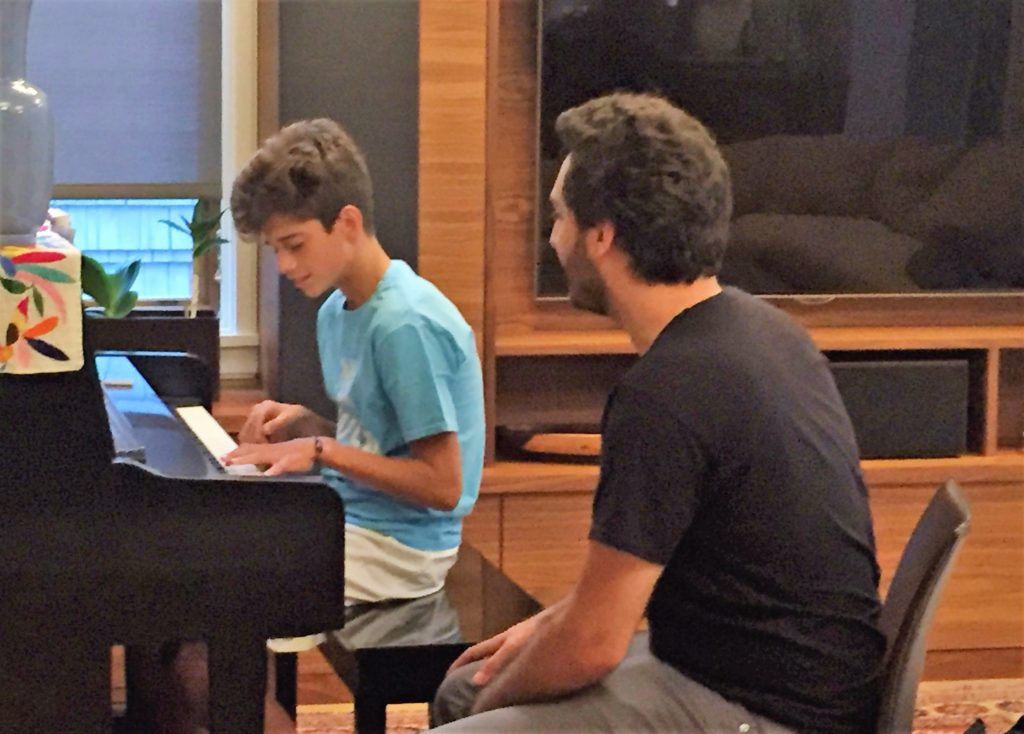 When Carlo was four years old, he was drawn to the piano. His older brother took lessons, and seeing him play inspired Carlo to tinker at the keys after his brother finished practicing. Noticing Carlo’s interest, his mother signed him up for lessons.

Even as a tot, Carlo loved experimentation, but the Suzuki method he studied left little room for the spontaneity and improvisation he loved. He eventually stopped Suzuki but continued his piano study.

Struggling for Time to Practice

An ambitious high school student, Carlo was swamped. Hours of homework, after-school sports, and extra curricular activities left little time for piano practice. As much as he wanted to, Carlo couldn’t dedicate the time to the difficult classical repertoire Doug assigned.

“Even though Carlo maintained a positive attitude through everything we did, I could sense his frustration at times,” Doug said. “Carlo is not one to give up on anything, but I could tell he was not happy when there was a particular piece that would give him trouble and he didn’t have enough time to invest in it.”

Paola, Carlo’s mom, felt he was on the verge of quitting altogether—she’d seen it happen once already with her older son, who’d dropped piano due to feeling overwhelmed and hasn’t touched the instrument since.

But Paola was determined to stop that from happening again.

“One thing striking about Carlo is, he still goes to the piano on his own, rarely to do what the teacher has instructed him to do, mostly to do his own stuff,” Paola said. “This is his way of relaxing. He comes home from school, hears something and tries to reproduce it on the piano. In this way, he expresses his creativity without structure. He has a genuine interest, and I wanted to encourage that without it becoming a burden.”

Rather than let him quit— or allow him to feel guilty for being unprepared every week before his lesson— Paola consulted with Doug, and together they devised a plan.

“The change of approach involves a much looser and fluid weekly process,” Doug said. “We aren’t following any method books or curriculum, and instead the lessons develop Carlo’s original ideas, melodies, and chord progressions. We may also work on some pieces by ear and try to figure them out just by listening.This takes the pressure off of Carlo and may actually make him more productive as a result.”

It’s a strategy that’s proven effective. With little to no expectation for progress in the traditional sense, Carlo is able to enjoy what he loves most about music: the freedom to improvise, something he loved even as a four-year-old studying the Suzuki method.

“The change is, there’s no guilt when Doug arrives. He no longer feels like he’s putting Doug down by not practicing the classical pieces he assigned. Instead, lessons mean Carlo takes a break from his homework,” Paola said. “The two of them have so much fun, you hear them laughing. It teaches him that music is not a duty.”

This approach works well if the goal of music lessons is simply to foster a love of music, or to enjoy the relaxing, therapeutic effect of music-making. Progress can be measured not by technical achievement or assignment completion, but by satisfying a more personal musical goal determined by the student—even if that goal is just to have fun. The approach may work especially well for teenagers, who are old enough to begin to make mature decisions about what they want—or don’t want— from lessons.

Since Paola and her husband don’t consider themselves musical, she values the role Doug plays in his life. Working with a young teacher like Doug, who’s active on the music scene, can offset the solitary nature of piano-playing, as well as provide a unique sort of companionship.

“My kids grow with lots of grown-ups in their lives,” Paola said. “It takes a village to raise a kid, and a piano teacher inspires them, and gives them direction and quality time with someone who has a passion for music.”

“I don’t think our relationship has changed much,” Doug said. “Maybe he is a little more open with me in regard to what he would like to do, because essentially he is directing the lesson as much as I am. But Carlo has taught me how to be adaptable. I try to connect with my students and understand what motivates them, but sometimes that process can be long. Arriving at a good teaching procedure with Carlo took some time, but sometimes time is all you need.”