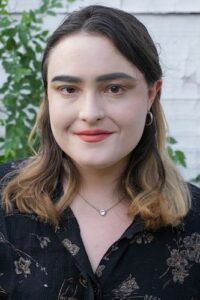 Originally from Orlando, Florida, Stephanie began her piano studies at age five. As she grew, she developed a wide-reaching passion for all things musical. She became deeply involved in her high-school choir program, where she gained experience conducting, leading rehearsals, and writing arrangements. She was awarded a scholarship to receive private classical voice lessons throughout high school.

Stephanie moved to Chicago to attend the School of the Art Institute of Chicago, where she earned a degree in visual and critical studies. Throughout her time at SAIC, she incorporated her musical skills in a variety of ways, from conducting a gospel choir for a graduate student’s thesis performance and leading a student a cappella group, to creating soundtracks for and singing in works by her professors and colleagues. She also studied composition at Roosevelt University’s music conservatory.

Stephanie has a passion for learning new musical skills, whether through teaching herself a new instrument, collaborating with local artists and musicians, or expanding her music theory knowledge through independent study. In addition to voice and piano, she plays guitar, violin, and trumpet. She also composes and records music and hopes to release her first album in the near future.

Stephanie has a long-standing passion for teaching and mentorship. She loves introducing new skills and concepts to students, meeting them at their level of experience and interest, and crafting a plan that builds on their unique learning style.