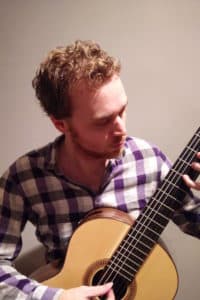 Originally from St. Louis, Ryan completed his graduate studies at the San Francisco Conservatory of Music, where he studied with Grammy-winning guitarist and composer Sergio Assad. Ryan has performed in a wide range of settings, from rock bands, to solo classical concerts, to historical reenactments, to musical theater. Since relocating to Chicago in 2016, Ryan has been diving into the local music community and culture. He loves listening to modern and experimental music, and exploring music’s ongoing evolution.

Ryan believes that all music can be used for learning and growth, and he motivates his students by finding music they love. He balances the study of theory and fundamentals with the space to play for enjoyment, nurturing a sense of fun, excitement, and creativity.