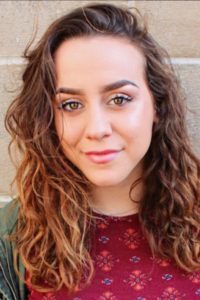 A native of Ithaca, New York, Lena began her piano studies at age four, and over the next 15 years, she explored classical, jazz, and pop. Around the age of 10, Lena began to develop her voice, participating in numerous musicals, vocal ensembles, and competitions. She also began composing her own music and creating new versions of her favorite pre-existing songs.

Lena soon made her way to classical voice, starting her study of opera in her early teens. The love of opera stuck with Lena, as she went on to pursue a vocal-performance bachelor’s degree, from Indiana University’s prestigious Jacobs School of Music. While at Jacobs, she performed in numerous operas, most notably Georges Bizet’s Carmen and Benjamin Britten’s Peter Grimes, and a number of solo recitals.

Lena arrived in Chicago in the summer of 2019, having spent the previous year teaching private piano, voice, and guitar lessons in Boston to almost 50 students, spanning all ages and abilities.

Lena’s passion for teaching shows in her bright personality and in her excitement to share the world of music with others. Lena has a positive, respectful, and motivating style. She has a natural and easy rapport, which she combines with her formidable musicianship and keen intuition. Lena loves to engage her students in critical thinking, enhancing their independence and problem-solving abilities.

When she’s not teaching, Lena can be found walking her dog Harvey by the lake, or checking out the many wonderful restaurants Chicago has to offer.