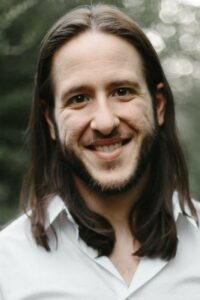 Casey is a musician with a rich and varied background. He began playing piano at five years old and quickly found a passion for music (especially boogie-woogie!). He grew up studying classical music, playing piano and guitar in church, performing with his high-school jazz band, and taking on a brief stint as a lead guitarist in a metal band. He later earned his bachelor’s in music from the University of Central Oklahoma, and a master’s in piano performance from the University of Washington. But that was only the beginning of the fun.

While studying, Casey discovered a love for musical theatre and ballet. With a firm grasp of classical and contemporary technique, he spent several years as a vocal coach, in styles ranging from opera to modern Broadway. He has been a music director and conductor for multiple university and regional-theatre productions. Casey further developed his improvisatory skills as a ballet accompanist, a lead pianist and choir director in the Episcopal church, and a dueling pianist. Currently, he works as a class pianist with Ballet Chicago, and as a music director and audio engineer with Roosevelt University.

Casey is also an accomplished composer and arranger. He has written scores for two short films, is developing a feature-length score, and is a freelance arranger, composer, and producer for recording artists and singer-songwriters.

Moving among varied disciplines and instruments, Casey finds that passion for music isn’t genre-specific — it can come from anywhere. That level of engagement is what he seeks to foster in his students. The combination of open curiosity and inspired instruction can produce true magic.