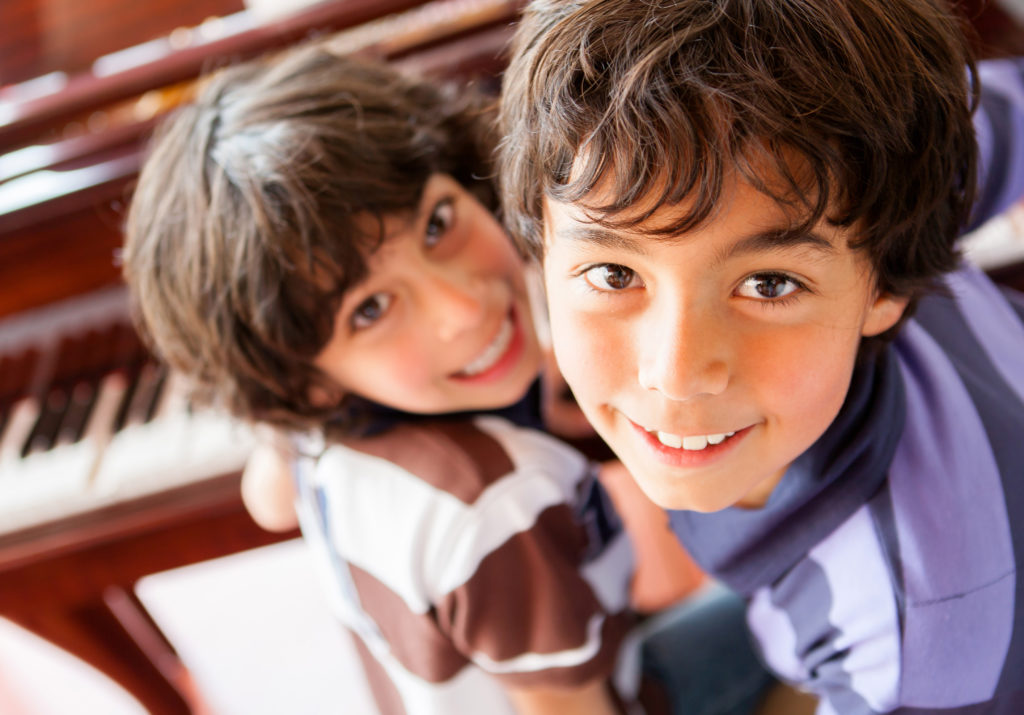 Competition between siblings can be fiercely emotional, especially when one sibling becomes the musical superstar. What can you do to mediate musical sibling rivalry? How can you ensure that everyone in the house— including you—feels good about music lessons?

1. Avoid pigeonholing your kids in your own mind.

In Siblings Without Rivalry: How to Help Your Children Live Together So You Can Live Too by Adele Faber and Elaine Mazlish, Anna recalls an episode from her childhood:

“My little sister Ruth used to watch me practice, and when I finished she would sit down at the piano and try to copy me. Then one day she went to the piano, and, without a single lesson, played the piece I had been struggling to learn for over a month. After that I stopped practicing. I told my mother I didn’t want lessons anymore.”

Her mother complied, settling on the idea that Ruth should be the one taking piano lessons. Anna stopped taking lessons, and her little sister Ruth became “the musician” in the family.

It seems to happen in every family. Parents– even if they never say the words out loud– label their kids, e.g. “the musician,” “the athlete,” “the brain,” etc. (Re-watch “The Breakfast Club” for more.)

Natural as it may seem–and as automatically as we do it– Faber and Mazlish warn against pigeonholing children. By deciding one sibling is “good” at one thing and the other isn’t, we tie them to limiting roles and abilities. We discourage the “less good” through the words we use and the actions we take; in Anna’s mom’s case, allowing Anna to quit lessons purely because of her sister’s talent.

As Faber and Mazlish put it: “There are a lot of little boys and girls out there who are being cheated of their rightful opportunities because of a sibling’s special prowess.”

In a case like Anna’s, in which one sibling interprets another’s talent as a cue to give up, a positive pep talk (or ten), and a refocusing on Anna’s own abilities and goals, could steer her toward sticking to it.

Which means that as a parent, you should definitely…

2. Talk to your teacher about building up your students.

When former Piano Power instructor Lucas Gillan taught piano to twins, the quick progress of one student left the other steeped in negative self-talk. But Lucas noticed certain fundamentals at which the “behind” student was stronger, and emphasized those strengths to counteract the negativity.

“I focused on what we were actually trying to accomplish, gave lots of positive reinforcement, and never even mentioned what the other sibling was up to,” Lucas said. He would say things like, “Who cares if your sibling is playing a different song? We don’t have time to think about that. You’re playing an awesome song of your own!”

3. Use a positive script when talking to your kid about it.

Faber and Mazlish offer an alternative response to letting Anna quit, one that is similar to Lucas’s in its positivity and focus. You can try putting all or some of the following in your own words:

What’s key here? Empathy, encouragement, and recognition of the student as completely independent of their sibling.

By seeing each of our children as true individuals, we keep ourselves from comparing them with each other.

Kim Matthews, whose three daughters take guitar and voice lessons, can’t recall a time when her girls fought over music. What’s her secret?

“We are conscious about encouraging them all pretty equally, and are careful to not compare them to one another, in music or any other scenario, like sports or school grades,” Kim said. “We occasionally on a Sunday evening will have them each play a couple songs for a family concert, where they can also support one another.”

Additionally, introducing a “project piece”— a more challenging song that is attainable after a long period of consistent practice— can also placate insecurity, doubt, or the affected disinterest that suffering students commonly display.

“Being able to play an impressive sounding piece can help boost confidence in a student’s own abilities, and cultivate an interest in [playing music] that isn’t contingent on their siblings’ progress,” Dominic said.

Perhaps most importantly, both teacher and parent should be aware of the situation, and on the same page about how to remedy it. Be sure your teacher recognizes the dynamic between your kids, and recommend some of the above strategies if needed. Your instructor may have even more ideas about managing the situation. As with every relationship, communication is key!