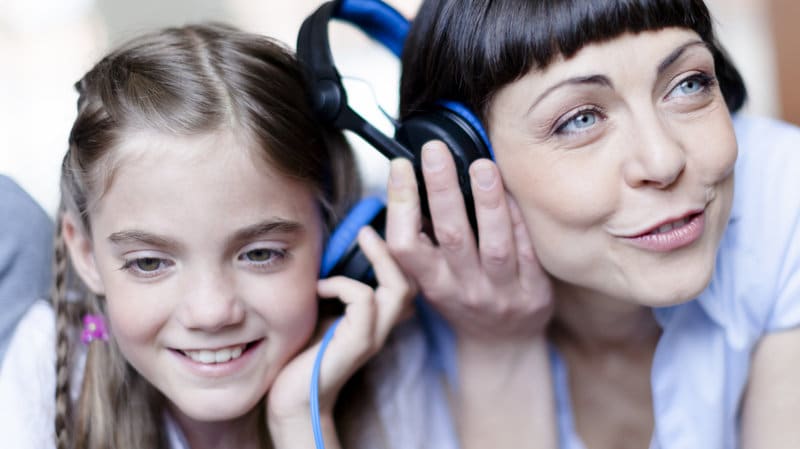 As former teenagers themselves, most adults know that trying to keep kids from their music is futile. Parent Laura Breakstone put it this way: “Trying to change your kid’s taste in music is as crazy as telling them not to like a certain vegetable.”

And yet, while many of us agree that our parents couldn’t control our taste in music—if we were going to listen to Guns N’ Roses, then Guns N’ Roses it would be—our parents’ musical preferences are stamped on us for life, whether we like it or not.

Raise your hand if your parent’s obsession with a genre drove you to loathe that music for life. For Breakstone, her father’s passion for the blues did just that.

“His only interest is the blues, and he slams every other type,” she said.

Breakstone’s dad may have been extreme, but the effect of his preference on his daughter reinforces the wisdom that pushing too hard, or being stubbornly opinionated, never works.

“I think if he had just encouraged a general love of music and let our tastes evolve on our own, that would have helped me not hate the blues so much,” Breakstone said.

Teacher Neyra Ballestros had the opposite experience.

Rather than insist his daughter listen to the ’60s Latin American music he loved, Neyra’s father indulged his own passion for artists like Roberto Carlos and Alberto Cortéz by playing their music on the guitar at home.

“Now as I’m older and I don’t have time to delve into new music, I listen to the same old romantics that my dad did,” Ballestros said.

“My father was my hero growing up,” she said. “I wanted to know everything he knew.”

Ballestros’s father modeled a good strategy: enjoy your own music. Let it play softly in the background, and never expect your child to love it. The most you can hope for is that they’ll remember it fondly as adults.

But while deliberately controlling kids’ tastes doesn’t work, the suggestiveness of contemporary pop music can be cause for real concern. Are parents to politely nod as their kids sing along to songs about whips and chains?

“It’s not that I don’t let them listen [to suggestive music],” said Kim Matthews, whose daughters are 16, 13, and 11. “But the music gives us an opportunity to discuss.”

Matthews said that growing up, her parents never talked to her about what she was listening to. Consequently, she takes a different approach in her parenting, using racy songs as conversational jumping-off points.

“It’s never a long conversation,” Matthews said. “They say ‘eww’ or ‘yeah, I know’, but at least they listen.”

Open communication promotes more open communication, said Laura Fehr, a board-certified music therapist at Music Speaks. When talking to kids about music, she recommends refraining from negativity and criticism, even if you’re at your wit’s end.

“They’re just going to push back, it’s what [teenagers are] supposed to do,” Fehr said. “Have that open conversation. Ask ‘What do you like about this music?’ It may be the beat they’re drawn to over the lyrics.”

Amy Haggarty, who kids are 9 and 5, said she has an “evolving discussion” with her kids about appreciating music without approving of the lyrics.

“Ke$ha is always my example of that,” Haggarty said. “Can’t stand her, but love her dance songs. Half of the music on the radio is in some way inappropriate, but if it’s good musically, then that can win back some points.”

“Teenagers need to feel like they’re being heard,” Fehr said. “[Asking their opinions about music] leads to respect between parent and child.”

But what about those really annoying songs? Or the ones you’ve heard so many times you want to scratch out your eyeballs? How can you stomach listening for another second?

In the car, it’s not beyond your parental authority to simply change the song. But sometimes they insist, begging for another spin of “Let it Go” like their lives depended on it.

In situations like these, Jason Rome, whose kids are 7 and 4, makes a conscious effort to change his mindset, perceiving the musical offender as another marker on his own journey of music exploration.

As a former instrumental music major, Rome might notice technical aspects of the song, like chord progression or engineering tricks. But if that doesn’t increase his appreciation, he simply tries to enjoy it.

“I’ll marvel at the fact that my little ones do love it, sing along, and are experiencing a state of absolute bliss over this crap,” Rome said. “If I want them to have an open mind, I have to have one, too.”

Who knows? You could get schooled by your child’s interest in a genre you thought you despised.

Such was the case for Michael Caplan, who was surprised and confused when his 16-year-old son took a liking to heavy metal– what Caplan called his “bête noire.”

But as his son grew knowledgeable about the genre, learning its history and sub-genres, Michael opened himself up to learning.

“He has really taught me that metal is about performance, that it’s the opera or Paganini of rock, it’s about virtuoso playing,” Caplan said. “And that the drummers are beyond belief in their abilities. And that there is actually a link between jazz and metal in their focus on solos.”

To regain perspective, consider this: parenting a child is a precious, fleeting thing. Before you know it, your kids are suffering the music of their own offspring.

“Maybe there isn’t a problem,” Rome said, “and this could be an opportunity for a shared and meaningful experience, or insight into your child’s life. I understand these become rare as time goes by.”