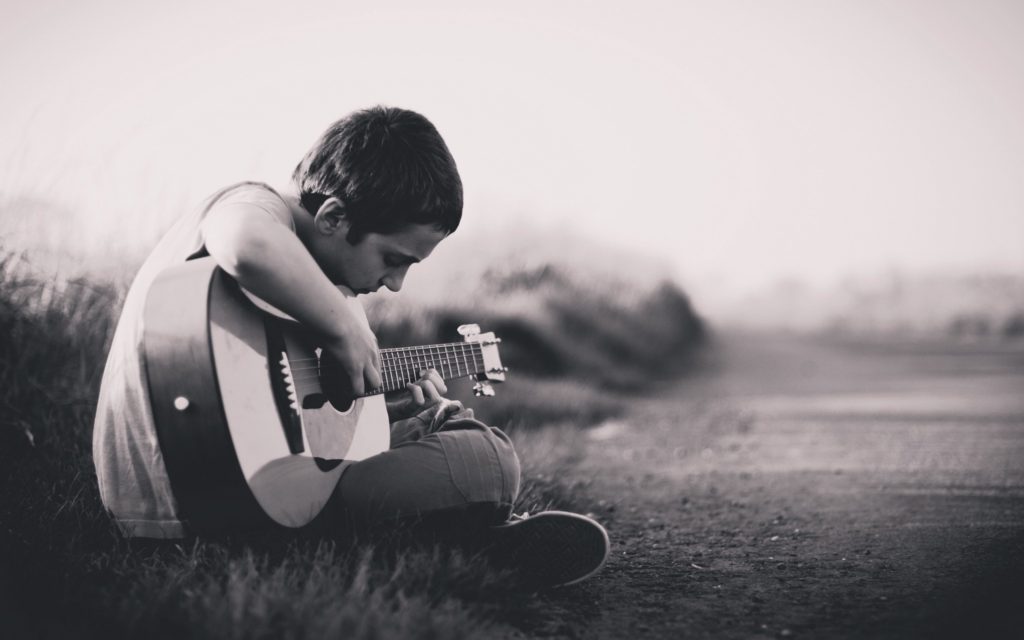 “I have a brain like a child,” says (self-deprecating) Piano Power teacher Benjamin Nichols, referring to what Buddhism calls “monkey mind”, the tendency for our minds to jump from thought to thought like monkeys on vines.

“As a younger musician, it was so difficult for me to play through a whole song without getting distracted,” Benjamin said. “As I grew as a music student, it became clearer that what was holding me back in my progress as a musician was my focus, and my inability to point my brain in the direction I wanted to.”

All of us may experience “monkey mind” while sitting down to complete a task, be it homework, a job, or a music lesson. Distractions can blur our focus, make us anxious, and rob us of our sense of mental peace.

Children are no different.

We want our kids to be calm and centered–especially during the lessons we pay for– but how can we ask them to “be” a certain way without giving them the the tools achieve it?

“I can say I want them to feel calm and relaxed, but then they act crazier because they’re trying to force themselves to be calm. They’re kids, so they’re not going to be calm,” Benjamin said. “Being calm is way different than doing things that calm you down.”

How meditation helps calm students down

Benjamin has found daily meditation helpful for his own mental focus. He uses the Headspace app, which he says has no “religious affiliations and takes a very scientific approach”.

“As I’ve become more practiced and skilled in my musical abilities, my experience with music has actually become more meditative,” Benjamin said. “My mind is able to reach a state that is both focused on the bigger picture (the performance, environment, atmosphere in general), as well as the one subject that I’m choosing to ‘point’ it to (tempo, rhythm, melody, etc.), without getting distracted.”

Inspired by his own success, he began using Headspace’s series of kid-focused meditations to remedy the restlessness, anxiety, and general nervousness he often witnessed in his students.

Playing an instrument requires several brain and body functions, and often comes loaded with the player’s expectations and beliefs. But meditation, Benjamin says, teaches the students to “point” their brains toward only one aspect of practice while they’re playing.

The techniques, which include creative visualizations, also help smooth the often rocky transition from life to practice.

We encourage our students to warm up their fingers, so why not their brains?

What are the techniques?

For his youngest students (5 or 6 years old), he spends about two or three minutes before the lesson talking them through guided tree and forest imagery as they sit on the bench with their eyes closed.

Walking them through creative visualizations sparks their imaginations, promotes good posture, and gets them moving organically at the keys (allowing the wind to “blow” them toward the highest, or lowest, keys).

“The main thing is they’re using ear, imagination, and focus at the same time, which is what I want during lessons,” Benjamin said.

For older kids, the steps are similar but with extended visualizations.

And though he hasn’t needed to use these techniques for teenage students, willing adolescents could also benefit from focusing and/or mindfulness practices.

Interested in breathing techniques to foster calm and focus? Check out Breathing Techniques: A Guide to the Science and Methods.

Does meditation work for every student?

Nothing, including meditation, works for everyone, and Benjamin says that bringing some students fully on board is a challenge. But as with music lessons themselves, many feel more comfortable with the process after a few sessions.

“If they have trouble sitting still, I’ll do the meditation with them. I keep reminding them, ’look how still I’m sitting, this is a challenge, see if you can do it, see if you can really breathe and listen’,” Benjamin said. “That gets them more into it.”

From applying these techniques, Benjamin now observes improved lesson quality, less time spent telling kids to be quiet and sit still, and students who can access their own brains for calm and focus. Plus, Benjamin has found the practice effective for varying needs.

“One [of my] students needs the pace to be much slower, and to take pressure off of himself. If I were to go in and just start, he wouldn’t have the focus to calm himself down and do well,” Benjamin said. “On the opposite side, most of my students want to go really fast, but we need to practice slow so they can be more precise, accurate, and tend to details. I find it works for slow and fast learners.”

Increased teacher-student understanding and bonding has been a pleasant side effect of teaching meditation.

“One student complained, ‘I don’t want to be here, I didn’t sign up for this’,” Benjamin said. “He’s a kid and knows he’s being forced to do things he can’t control. So I tell him it’s not about the thing, it’s about his attitude, and that his attitude is in his brain. Now he understands that if he changes his brain [through meditation], he changes his attitude.”

Ultimately, Benjamin says, he hopes his students will apply these learned mind states whenever they make music– and perhaps realize that the ultimate mindfulness arena is life itself.

“My hope is that the meditation helps them to bridge the gap between their music study and the rest of their life,” he says. “They begin to associate the meditative state with a positive experience, and learn how to live in that state in other areas of their life.”

Want more advice about cultivating focused practice? Check out our 12 tips for creating ideal music practice. Interested in learning more about mindfulness in general? Check out The Art of Mindfulness from RelaxLikeaBoss.com.