Today we have a guest post from Mike Levitsky of DrumsandGuitar.com, a site that offers guitar and drum lessons, gear reviews, and other helpful music info. Written with the help of one of his high school students, the article serves as a great reminder of the myriad benefits of playing an instrument. Important to remember when you just don’t feel like practicing! We hope you enjoy it. 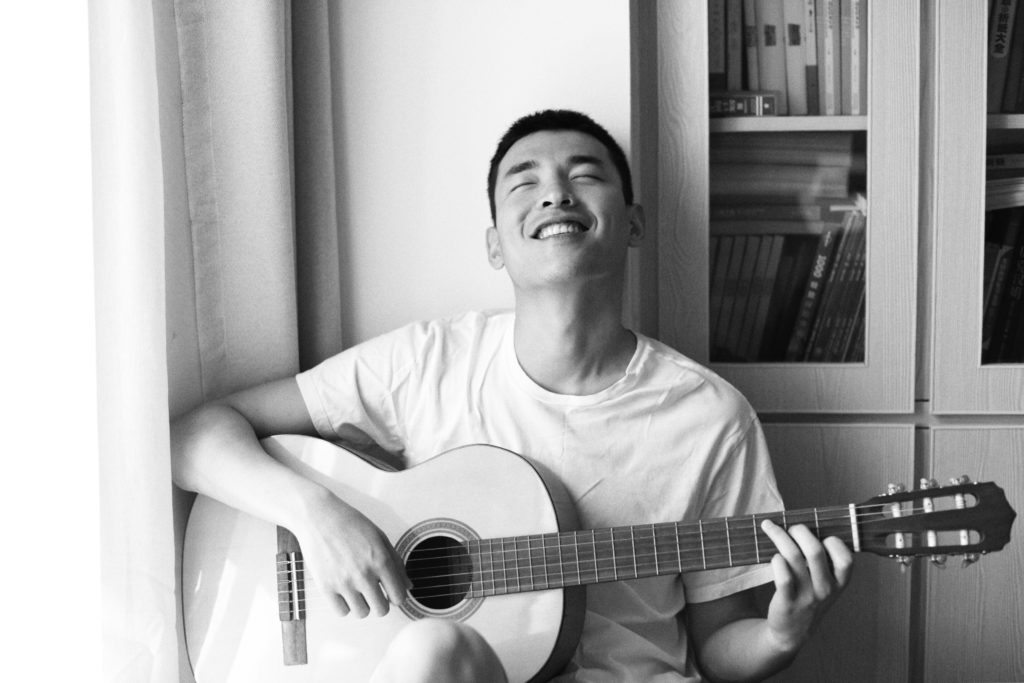 Choosing to play an instrument is the beginning of a journey. One that is exciting, but often filled with struggle and hard work. It will require you to take in new information and master new skills.

Listed below are some of the many benefits of playing an instrument. When you feel yourself getting discouraged, I hope that remembering these benefits will encourage you to keep practicing. I promise, playing a musical instrument is worthwhile!

In no particular order, learning to play an instrument:

The National Center for Biotechnology Information published a study on the effectiveness of music to lower stress. The test involved putting volunteers into three groups. Before being exposed to a stressor, each group was exposed to a different stimulus. Group 1 – Relaxing music, Group 2 – the sound of rippling water, and Group 3 – resting with no sound present. After, their stress indicators were measured. The study showed that those who listened to relaxing music before the stressor had significantly lower cortisol (the stress hormone) levels than those in the other two groups.

If you are like me and find it easy to get stressed out, listing to music could help lower your stress levels. Listening to your own instrument gives the benefit of taking your mind off of your day.

The process of learning to play an instrument is not always easy. It involves not only your mind but also your body. You will have to learn fingerings and/or chord shapes, develop technique, and memorize new information.

Slowly, with consistent practice, you will find yourself getting better. With each new milestone, you gain a small reward for your efforts and this will keep you motivated. Making music requires patience. Instead of getting immediate results, you will have to persevere.

Keep at it! you will achieve the results you desire.

You don’t have to become a virtuoso to reap the benefits of music. You can gain many of these benefits by just learning the basics. You will develop a taste for the different composers, styles, and genres of music. Not only does this cause you to be more well-versed in music, but it also leads to a higher appreciation of the skill.

According to Aristotle in his Politics Book 8, unless you have taken part in music education, or in learning an instrument, you have no real basis for assessing the quality of a piece of music. Interestingly, he also says that you should not dedicate yourself to learning a difficult instrument because it is a waste of time. Just learn enough to enjoy playing a bit, and to judge the quality of music.

Aristotle on the Flute: “the flute is not an instrument which is expressive of moral character; it is too exciting”. Of course, I disagree with his position on dedication but agree with his first point…

…and the flute thing.

At its core, music is art.

Music is a language, and the more “words” you learn the more you will be able to say. You will soon find yourself wanting to apply the information you’ve learned to create music of your own and express your own voice. Music is not just about knowing how to play specific songs, it is about expressing emotion through sound. Whether it is just playing your own version of a song, or creating an entirely new one, learning how to play an instrument enables you to use your creativity to say something original.

Uses Almost Every Part Of The Brain

Check out this great video from TedEd about how music benefits your brain.

While investigating the effects of music, physiologists Daniel J. Levitin and Mona Lisa Chanda found that listening to music and playing an instrument increased the immune system. These activities lead to the manufacturing of the antibody immunoglobulin-A. Immunoglobulin-A is a natural killer cell, which kills viruses. If you start to feel under the weather, just pick up that guitar and start playing!

Adding learning an instrument into an already busy schedule can be challenging, especially if you want to become an advanced player. The desire to get better will help you to schedule in practice during your already busy day. You also learn the life skill of how to waste less time and to use your time wisely. Instead of watching the Dodgers lose (again), you will soon focus on learning how to play “Clair de Lune” or “Stairway to Heaven”.

Way back in 2003, ABC Science included a study conducted among school students, half of whom had been musically trained, and half who had not. The test involved reading a list of words to the students and asking them to recall the words after a space of time had elapsed. The study found that the boys who had been musically trained had a significantly better verbal memory than the boys who had not. In addition, the more musical training they had, the more words they were able to remember.

If you can’t remember where you left your keys, maybe it is because you forgot to practice your instrument!

Once people know you can play an instrument well, they want to hear you play. Often, when I am at family gatherings or hanging out with friends of the family, I am asked to play some music for them. At first I didn’t like it, because instead of just hanging out with people I knew I had to try and think of the songs I could play, but in reality, it is a great opportunity to share the gift of music.

Once you learn how to effectively play an instrument, not only do you have the ability to share your gift with family and friends, you can bless those at nursing homes, church, banquets and more. You might even get paid for your work!

In 2009, the European Journal of Science investigated the relationship between musical training and the processing of vocal emotion. They found that those who were musically trained better detected vocal emotions. This makes sense because there are many “emotions” conveyed through music. For example, excitement is produced through dynamics that get progressively louder and higher pitched. Apparently, being exposed to this tonal variance in music can help you to not just detect the emotions of music, but the emotions behind people’s words.

No one (unless you are insanely gifted) can effectively learn to play an instrument overnight. Making music requires work and a consistent investment of time and effort. As they say, practice makes perfect. Discipline is necessary to go through the process of consistent, focused practice, especially when you would rather watch that new movie. This discipline can carry over into other aspects of your life, elevating the quality of the life you live.

Another study in 2003 from the Journal of Neuroscience compared the brains of professional musicians, amateur musicians, and non-musicians. The study found an increase in gray matter in many areas of the brain of professional musicians. The amateur musicians had less grey matter in those areas, and the non-musicians had the least gray matter. According to Via Radiology, gray matter provides us with information processing power. The more advanced you are in music the larger volume of gray matter you have in your brain.

Benefits Spelling and IQ In Children

In a study performed by the then doctoral student Benjamin Zendel and Dr. Claude Alain, participants were instructed to attentively listen to complex sounds. It was found that the older musicians auditory cortices responded the same as the younger participants and at a higher functionality than the older non-musicians, who had age-related hindrances. This is ironic because many musicians experience hearing loss from the loud music they are a part of, but if you protect your ears from the “loudness” of the music, music actually benefits your hearing!

Benefits The Brains Of Babies

McMaster University performed a study in which one-year-old babies participated in interactive music classes. These classes entailed activities such as learning to sing specific songs and playing percussion instruments with their parents. They found that the babies who participated in the interactive music classes smiled more often, could communicate better, were less distressed, responded more favorably to music that was tonal and consonant (as opposed to atonal and dissonant music) and had more advanced brain responses to tones of music.

At the Université de Montréal in Canada, Dr. Simon Landry led a study comparing the reaction times of musicians who had at least 7 years of training with non-musicians. Dr. Simon had the participating students place one hand on a mouse, the other on a vibrotactile device, and placed a speaker in front of them. If the students felt a vibration from the vibrotactile device, or heard a sound from the speaker, or sensed both happening at the same time, they were instructed to click the mouse. The results demonstrated that the musicians had significantly faster reaction times in all three ways they were stimulated.

There you have it! 16 benefits to remind yourself of so you can accomplish your goal of learning to play an instrument.